Troy, N.Y. - Nearly 400 people attended the YWCA of the Greater Capital Region, Inc. Resourceful Women’s Luncheon on Wednesday, October 1, 2014 at the Hilton Garden Inn, Troy. It was the largest attendance for the event ever.

The event raised a record-breaking $29,000+. All proceeds from the Resourceful Women’s Luncheon benefit the YWCA of the Greater Capital Region, Inc., which strives to provide 360º of Support to help encourage and empower women in need. The YWCA-GCR gives its’ residents a second chance and a fresh start, by providing permanent housing while they receive the education and support needed to sustain themselves and their families and become self-sufficient. 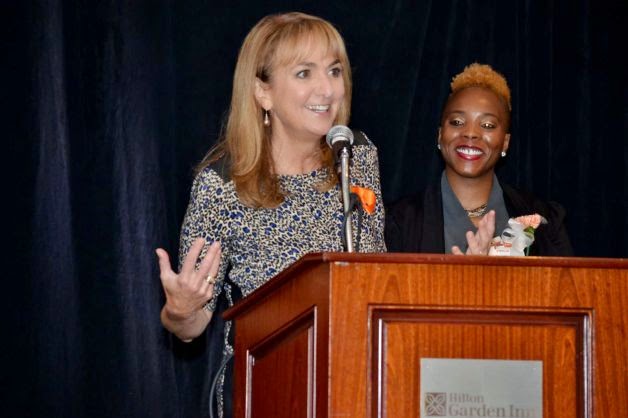 The Resourceful Women Awards were established in 2000 to recognize and honor those whose community and professional pursuits advance the empowerment of women, a core value of the YWCA-GCR’s mission. The luncheon strives to honoreveryday women, not just well-known women in highly visible positions. These accomplished, energetic, and committed women represent the YWCA-GCR’s spirit of determination.

WNYT News Channel 13’s Benita Zahn served as emcee for the event to honor 25 amazing women in the community. Each of honorees was recognized for being resourceful in their professional and personal lives. In attendance were County Executive Kathy Jimino, Honorable Elizabeth Walsh, and Honorable Chris Maier. Mayor Lou Rosamilia presented the Woman of the Year, Patty Fusco with a certificate from the City of Troy to recognize all of her work, community impact and support to the YWCA-GCR.

The luncheon honored Patty Fusco, President and CEO of Fusco Personnel, Inc. as the Resourceful Woman of the Year. Having just celebrated the 20th anniversary of her firm's founding the end of April 2014; Patty truly epitomizes the definition of not only a truly resourceful and accomplished woman, but is also a remarkably caring and giving woman in and beyond her community. Her professional life has been dedicated to matching women with the right employers, and despite her rigorous professional demands, she has always found the time to keep helping the community in both social and economic endeavors.

This year the YWCA of the Greater Capital Region, Inc. is introducing a Resourceful Women’s Luncheon reunion on Thursday, November 6, 2014 from 4:30 – 6:00 p.m at the YWCA-GCR. This event will give current and past honorees a chance to network and get to know each other, hopefully to build connections that will further them professionally. Additionally, since this is many of the women’s first contact with the YWCA-GCR, it will give them the opportunity to learn more about the organization and how they can help.

Twenty-three additional women were honored at the event. The complete list of honorees and their companies is as follows: