It's campaign silly season which always seems to mean issues with signs. The mayoral race in Cohoes is no different.

Below is a press release from Dianne Nolin and a response from Shawn Morse - who are both Democrats running for the mayoral seat in the Spindle City:


NOLIN ASKS: WHERE IS THE FAIR CAMPAIGN MORSE PROMISED

It’s been only two weeks since Dianne Nolin’s Cohoes’ Mayoral campaign began putting up lawn signs across the city. Yet, almost daily, the campaign is receiving emails from people who are asking for new signs because theirs have been stolen.

“My opponent made quite the point about signing the Fair Campaign Pledge,” said Nolin. “I stand by the pledge. I’m not sure if he does. But, I am sure about the emails and complaints we’re getting about missing Nolin signs and Morse signs being put up where no one has asked for them.”

Over the weekend a series of Morse signs popped up on Columbia Street across from the service driveway for the Eddy Village Green. The signs, which are placed on private property owned by Cohoes resident Regina Grego, obstructed the view of Nolin’s signs. 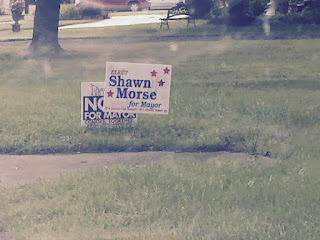 “No one called and asked me if the Morse signs could go up. The Nolin campaign did ask and I said yes because I’m supporting Dianne,” said Grego. “Shawn needs to remove his signs from my property immediately.”

On Thursday, August 13th, the campaign received two emails about stolen signs. One email from a Cohoes resident on McElwain read, “The lawn signs have disappeared if you would like to replace them.” A Columbia Street resident wrote “I just wanted to let you know that my lawn sign has disappeared. Kindly replace at your convenience.”

“With so many important issues facing the City, I would think my opponent would spend more time talking about the issues.” said Nolin. “That is what a fair campaign is about.”

Nolin's opponent in the Democratic primary responded: "Nearly three weeks ago, I asked my opponent to sign the Clean Campaign Pledge. And even earlier, I had asked for my opponent to agree to a series of debates across Cohoes. Unfortunately, she has yet to respond or agree to the pledge, has only agreed to one forum so far, and this latest news from their campaign is only another unfortunate indication of the kind of campaign that is being run not only against me, but against the people of Cohoes. As Mayor, just as I have as a firefighter, I will respond to the needs of the people of Cohoes because they deserve better," said Shawn Morse, Democratic candidate for Mayor of Cohoes.
Posted by Unknown at 10:06 AM