New equipment is being put in by railroad company Canadian Pacific in the Spindle City, officials said.
Canadian Pacific workers were installing a new safety arm and cabin at the intersection of Mohawk and Columbia streets Wednesday. Employees there said that the work also included eventually taking down old electric wiring poles along the railroad track.
Similar safety infrastructure work will be done at multiple intersections in the Spindle City and work will continue into the fall.
City officials - including former Mayor John McDonald - had voiced concerns about the infrastructure for years and their desire to create a Quiet Zone around the tracks which would require upgraded equipment.
Employees at one of the sites Wednesday said funding was at least in part coming from the state for the project. 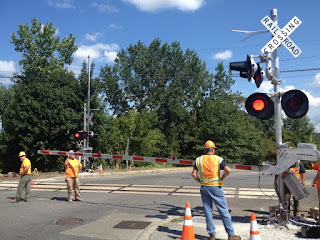