WASHINGTON >> Thursday, the U.S. House of Representatives passed the National Defense Authorization Act for Fiscal Year 2015 (H.R. 3979), which includes language that allows the President to award Albany native Sgt. Henry Johnson the Medal of Honor for acts of incredible bravery demonstrated during World War I.
“If you’re from Albany, you know the story of Henry Johnson. The superhuman bravery demonstrated by Sgt. Johnson in defense of our nation and his fellow soldiers is a great source of pride for our community, and for almost a century these acts have gone un-recognized by our country. Today we passed a very large hurdle and I look forward to our work being completed to honor this American hero,” said Congressman Paul Tonko. “I have followed Sgt. Johnson’s story since long before becoming a Member of Congress and have worked hard to make sure his story is heard by others. I thank the many individuals who never gave up on our tireless efforts to accomplish this goal, including Sgt. Johnson’s relatives, Senator Schumer, and my predecessor, Mike McNulty. This was a decades-long team effort across the board and I could not be happier to see our efforts pay off.” 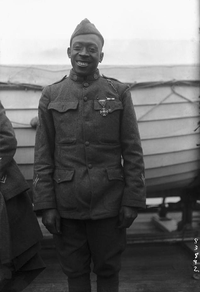 The legislation, which includes language based on a bill that Rep. Tonko introduced, is expected to pass the Senate and be signed into law by President Barack Obama. After that, the President will have the authority to officially award Johnson the decoration.
Unless a waiver is passed by Congress, service members who exhibit extreme valor in combat can only be awarded the Medal of Honor if their acts occurred in the previous five years. Tonko has worked to pass this waiver by working with leadership from both parties in the House of Representatives as well as the House Armed Services Committee. On September 11th of this year, he introduced legislation in the house, H.R. 5459, as a companion to Senator Schumer’s bill in the Senate.
A member of the Harlem Hellfighters, Johnson fought off a German raid almost single-handedly after being wounded twenty-one times. When his rifle ran out of ammunition, Johnson used it as a club until it broke. At which point, he used his bolo knife to kill four Germans and wound at least twenty, who retreated in fear, officials said.
Posted by Unknown at 9:33 AM