State Assembly Speaker Sheldon Silver was arrested Thursday on public corruption charges and accused of using his position as one of the most powerful men in Albany to obtain millions of dollars in bribes and kickbacks masked as legitimate income. 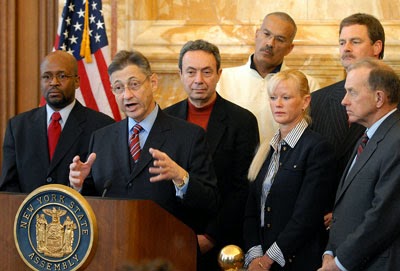 (Silver, speaking, with Canestrari behind him. From the NYS Assembly site)


"It’s all very upsetting. I've known Shelly for about 30 years. He's very bright and very smart. He must be given his day in court. We all sometimes rush to judgement. Let the facts come out and let the other side present its case. Just because the U.S. attorney said something does not mean it is criminally or legally true.

"I don’t believe it. I don’t think he would do anything criminally wrong. He is a brilliant attorney.

"We’ve been through this before in the Assembly with Mel Miller. I remember he was indicted around holidays. I stood by Mel Miller. He was subsequently convicted and, of course, resigned from the Assembly. Then the conviction was overturned on appeal. In the meantime, he lost everything - his seat, the speakership, and he accrued millions of dollars in debt. But he was vindicated legally."

"I will stand by Shelly Silver as his friend and let events take their course."
Posted by Unknown at 12:12 PM