Councilwoman April Kennedy announced Thursday that she will not seek re-election after 12 years of service as 1st Ward City Councilmember in Cohoes. 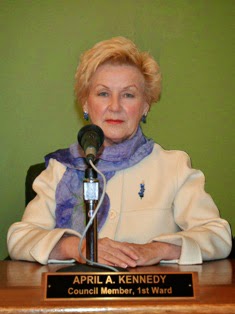 Kennedy stated, " I have been very grateful for the opportunity to serve the wonderful people of the 1st Ward. I'm extremely proud to have followed in the footsteps of my late father, the Hon. Frank X. Kennedy, and did my best to live up to our firm belief that government's sole purpose is to serve the needs of the people.
Kennedy began her career in 2004 and has served three terms. During that time she was elected President of the Common Council from 2004 through 2007. She is thankful to the people of the 1st Ward for their support over her three terms but now it is time to move on to new endeavors.

"During the past twelve years I have had the privilege to work with the former Mayor John McDonald and the current Mayor George Primeau as well as many councilmembers for the betterment of Cohoes. We have been helped in this effort by the employees of the City as well as the Democratic committee members.  Together we have moved Cohoes forward."
Posted by Unknown at 9:18 AM