COHOES >> The Cohoes Public Library will continue to be funded directly by the city of Cohoes and indirectly through taxpayer funding following a vote Tuesday night in which the proposal to create a tax district for the library was defeated with 68.9 percent of the votes.
“We are disappointed in the result but are happy that we significantly raised awareness of the library in the City of Cohoes. We thank all who voted and will continue to serve the Cohoes Community,” said library director Matthew Graff in a statement Tuesday night.
With a larger turnout than the recent school budget vote in May, the vote was 876 against and 394 in favor. Last month, a total of 638 voted in the Cohoes school budget vote.
With the vote, it is expected that the library will close Saturdays, further cut new materials, cut summer reading to 2 programs, increase fines/fees, stop technology upgrades, reduce public access to computers, and cut staff, officials said prior to the vote.
If it had been approved, the library would have been authorized to have a $514,000 budget with $490,000 from community-based funds. This would have meant an average homeowner would have paid an estimated $97 for the year.
“It’s not just about the new tax issue,” said Erin Vohs, a Cohoes resident for 23 years. “Enough is enough.” 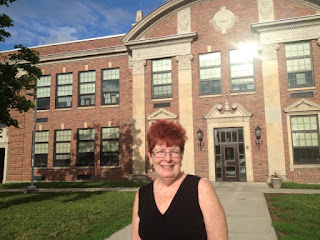 She and many other residents voiced their disapproval of an additional tax and of the plan for financing the library. Instead of a school district public library tax district, some residents said the library should consider non-profit status or downsizing.
“I cannot support this idea,” said Steve, a 26-year resident of Cohoes. He was one of several who wished to not use his last name. “I used to use the library and it was quite nice, but they need to broaden their catalogue by joining a larger library association. And the electronic age is catching up on the print medium.”
The Cohoes Public Library, which was founded in 1880 as the Cohoes District School Library in the  present-day Cohoes Music Hall, is part of the Upper Hudson Library System. It has access to about 65,000 print and digital resources with books in the collection along with e-books and movies, library officials said.
The library, located on Mohawk Street since the 1970s in the former St. John’s Episcopal Church, was housed in the city hall for a time and it has been funded through the city budget for decades. It has lost five morning hours per week and cut programs due to funding issues. In 2008, there were 43 programs for babies to 5-year-olds, and, in 2014, there were none. In 2008, there were 28 summer reading programs with 338 kids. In 2014, there were 7 programs with 108 fewer children, library officials added.
A 17-year Cohoes resident named Donald, who also did not want to give his last name, said he usually does not vote on these types of referendums but he wanted to help the library.
“I voted in favor of the new district,” he said. “I think the idea of a new tax got people excited but I think the fear that the library might close brought a lot of people out, too. It was a hard vote - I really thought about it. If the library was gone, we’d be at a loss.”
Graff noted in a prior interview, though, that the library is not in danger of closing. 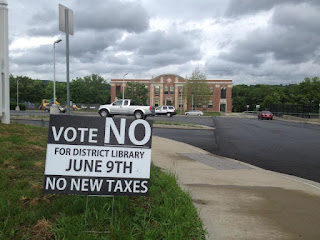 (A sign against the library district, across the parking lot of the Van Schaick school)

Some at the polls Tuesday felt that there were miscommunications about the vote and felt that the library could have done a better job of getting out information.
Library officials stated that multiple public meetings were held and information was posted on the library website.
City comptroller Mike Durocher said the current 2015 library budget is about $245,000. Both he and Graff pointed out, however, that what is budgeted and what is allocated fluctuates.
Prior to the results being known, some speculated that the budget would not pass due to the process being made political including how some people’s names and photos were used after they had signed a petition circulated by the Friends of the Cohoes Public Library which stated “I support stable funding for the Cohoes Public Library”. Under that heading and above where people could sign, a paragraph said: “By signing below, you are saying you support the upcoming district vote for the Cohoes Public Library, agree to have your name listed with ‘Cohoes Taxpayers for a Stronger Library’, and give the campaign committee permission to use your name in materials supporting the vote.”
The library then received complaints from multiple people whose names were used in a flyer prior to the vote since they were not directly contacted about using their names and/or photos.
“They signed the petition and maybe then changed their mind in the meantime,” said Carol Clingan, the library board president.
Graff added: “It was not in fine print. It was not hidden.”
The library leadership has also already been looking at moving to a new location but an ideal site has not yet been found, Graff said in a prior interview.
Regarding the future of the library, a statement Tuesday said: “We are stretched for staff and resources and will do our best to continue to serve the people of Cohoes to the best of our ability. The Board will now regroup and review our options.”